AngloGold Ashanti, with members of the World Gold Council, recognises the importance of working in partnerships with governments and communities to help to support the achievement of the UN Sustainable Development Goals (SDGs).

AngloGold Ashanti published its first Climate Change Report, which provides an update on the Group’s Climate Change Strategy, climate performance, and how climate-related risks and opportunities are being managed.

On 10 December 2021, World Human Rights Day, AngloGold Ashanti launched its first Human Rights Report, which provides an overview of the Group’s commitment and approach to protecting and respecting human rights across the organisation, as well as our performance during the 2020 financial year.

Sustainability is embedded in our business activities both as a driver for long-term value creation and as a pillar of our social licence to operate.

Contributing to the SDGs

Join our group on theVault to receive instant email notifications on new publications. 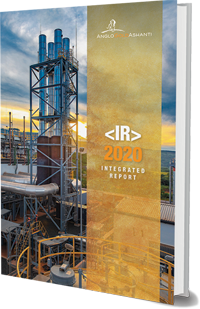 Salaries, wages and other benefits

Royalties and other taxes paid

Taxes paid on behalf of employees

No VPSHR incidents or allegations

AngloGold Ashanti, with its head office in South Africa, is an independent, global gold mining company with a diverse, high-quality portfolio of operations, projects and exploration activities across nine countries on four continents. While gold is our principal product, we also produce silver (Argentina) and sulphuric acid (Brazil) as byproducts. In Colombia, feasibility studies are currently underway at two of our projects, one of which will produce both gold and copper.

AGA Mineração, in the state of Minas Gerais, comprises the Cuiabá complex and the Córrego do Sítio mining operation and the Cuiabá and Queroz gold plants.

Geita, one of AngloGold Ashanti’s flagship mines, is located in north-western Tanzania, in the Lake Victoria goldfields of the Mwanza region, about 120km from Mwanza and 4km west of the town of Geita.

The Gramalote project, a joint venture between AngloGold Ashanti (50%) and B2Gold (50%), is located near the towns of Providencia and San Jose del Nus within the municipality of San Roque, in the northwest of the Department of Antioquia.

Iduapriem, an open-pit mine comprising the Iduapriem and Teberebie properties and the Ajopa South West concession, is located in the western region of Ghana.

Kibali, one of the largest gold mines of its kind in Africa, is situated in the DRC, adjacent to the town of Doko and 210km from Arua on the Ugandan border.

The La Colosa project is located approximately 150km west of Bogota Colombia in Tolima Department. The project is 100% owned and managed by AngloGold Ashanti and has been voluntarily suspended, since 2017, due to force majeure recognised by the national mining authority.

Obuasi, an underground operation mining to a depth of 1,500m, is located in the Ashanti region, approximately 60km south of Kumasi.

The Quebradona project is situated in the Middle Cáuca region of Colombia, in the Department of Antioquia, 60km southwest of Medellín within the Municipality of Jericó. The project is 100% owned and managed by AngloGold Ashanti.

Serra Grande, comprising three underground mines and an open-pit, is located in central Brazil in the state of Goiás, about 5km from the city of Crixás.

Siguiri is a multiple open pit gold mine in the relatively remote district of Siguiri, around 850km northeast of the country’s capital, Conakry.

Sunrise Dam is an underground and open pit operation located 220km northeast of Kalgoorlie and 55km south of Laverton.

Tropicana is comprised of a number of open pits and an underground mine located 200km east of Sunrise Dam and 330km east-northeast of Kalgoorlie.